The hurricane season in the Caribbean and the Dominican Republic 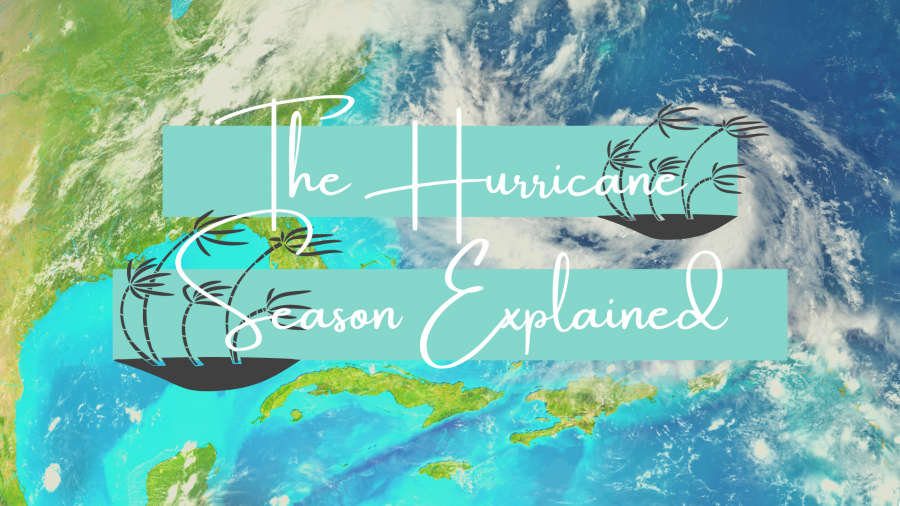 We've all heard about intense storms ravaging the tropics and see images of them on television from the comfort of our couches. Yet, we don't know much about hurricanes if we are all scared of them.

When do they happen? How likely are they to ruin our next vacation? Should we dare to settle in our well-deserved new home on one of the beautiful islands of the Caribbean? What should we do if this does happen? Is it safe to invest in and buy property in a country located in a region affected by hurricanes?

In this post, let's try to answer these questions and more, with a particular focus on the island of the Dominican Republic and the beach town of Las Terrenas.

What is a hurricane? And how is it formed?

A hurricane is a large storm rotating with high-speed winds that form over warm waters in tropical areas. This is scientifically called a tropical cyclone.

Hurricanes sustain strong winds, and they have a low air pressure area in the center called the eye.

Tropical cyclones form over the warm waters of tropical seas and draw their energy from the latent heat of the condensation created by these hot waters. Yet, several conditions are necessary for their formation.

Firstly, the water temperature must be high to a depth of at least 50 meters (150 feet). The air must also be hot and humid and move on the ocean's surface. 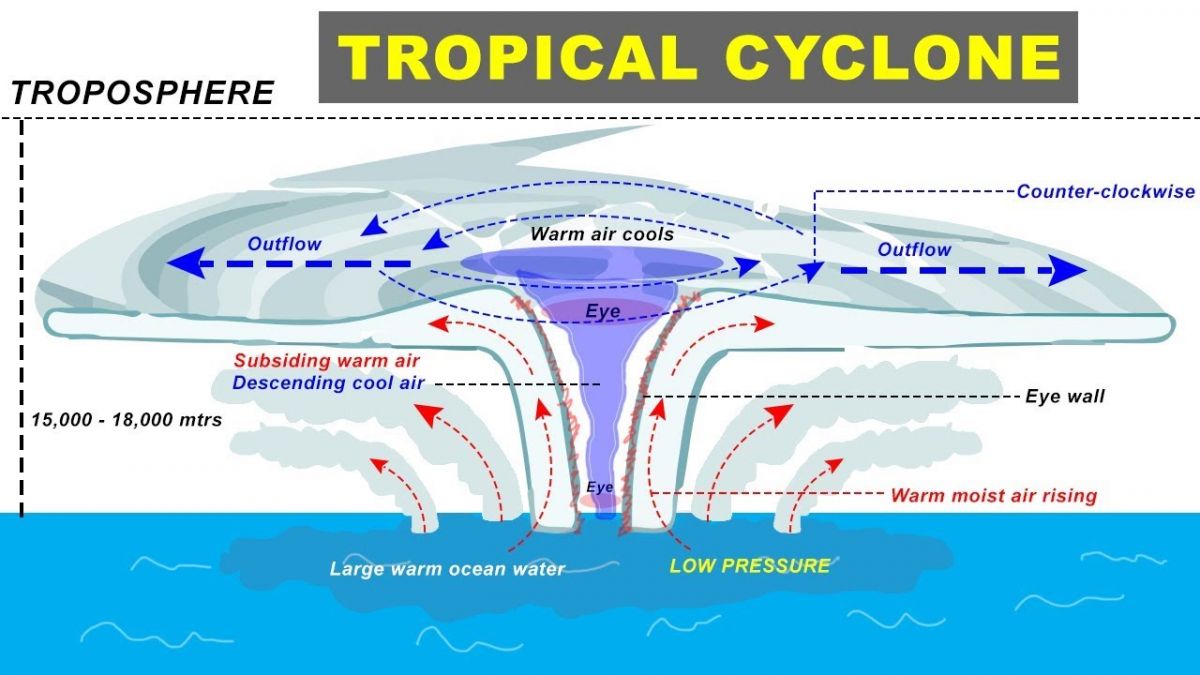 The water vapor that is created then rises in the atmosphere. As it climbs, it cools down and turns into drops of water.

That condensation releases heat into the atmosphere, which lightens the air. The heated air continues to rise, and the humidity of the ocean takes its place. The phenomenon is gradually increasing the speed of the wind.

As it continues, it takes the form of a group of storms moving over the ocean's surface. This organized system of clouds and thunderstorms circulates anti-clockwise in the Northern Hemisphere. It is called a tropical depression and can turn into a tropical storm when it sustains winds of 74 mph (64 knots) or more. A hurricane reaching 111 mph or more becomes a central hurricane, corresponding to a category 3, 4, or 5 wind turbine on the Saffir-Simpson wind scale.

Check out this animated map.

The season extends from June 1 to November 30 (according to the World Meteorological organization). The most intense months are usually from August to October, especially September.

Not to worry, though; during the last 20 years, only one powerful hurricane has seriously hit the DR; it was in Santo Domingo. This category three hurricane, George, struck the capital on September 22, 1998. Before that, category 5 Hurricane David also affected Santo Domingo in 1979.

In 2017, hurricanes Irma and Maria crossed the Caribbean and Florida, decimating on their course some islands and tearing down many trees and power lines in urban areas. Hurricane Irma was a massive storm 650 kilometers wide with winds of up to 156 miles per hour (251 kilometers per hour).Yet, despite the magnitude of these two hurricanes, the northern part of the Dominican Republic was spared... once again. 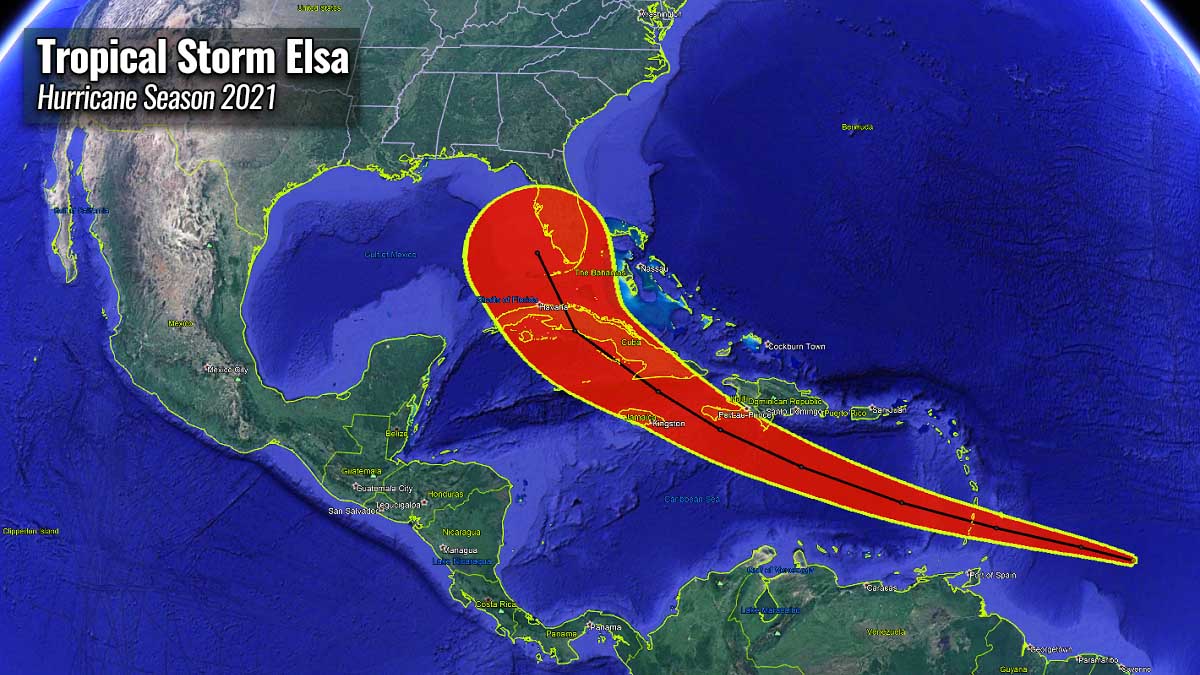 Is the DR lucky? Although these two weather systems caused damage, the North Coast only recorded tropical storms, not direct hurricanes. Mainly, the torrential rain caused momentary floods and power outages across the island. However, two days after Irma and only a day after Maria, shops and companies had almost all returned to business.

The island is very well armed against the storms running around in the Atlantic basin because of its location and geography. First, the Dominican Republic is almost perfectly centered between Cuba in the west and Puerto Rico in the east. Both neighboring islands act as a protecting belt.

Not only that but the Dominican Republic is also protected by its mountains. Indeed, the island is home to the largest Caribbean summit, El Pico Duarte, and many other fabulous mountains, which help it during the hurricane season. Moreover, as the mountain ranges are excellent and the coastline warm, it creates variable temperatures and pressure systems that keep storms away or reduce their intensity.

Even if a hurricane crosses the area where you are on vacation or live, it is unlikely that the Dominican Republic will be directly affected. Most often, the storm's periphery touches the island; rainfall is the leading cause of damage and nuisance. In addition, thanks to modern satellite technology, we know the trajectory of a hurricane several days in advance. In summary, visitors to the Dominican Republic have only a 2-3% chance of being hit by a storm on a one-or two-week trip.

USA Today, an American national daily points out that the Dominican Republic is less likely to be hit by a hurricane than neighboring Caribbean islands such as the Bahamas or Puerto Rico.

The only inconveniences a hurricane can bring to the Dominican Republic are the rain, bad weather, and delays or cancellations of possible flights. In reality, there is nothing more dangerous than that. When hurricanes hit the Dominican Republic, they can cause considerable damage because many structures in the poorest rural and urban areas are not very strong. But our homes in Las Terrenas are built to withstand strong winds and rain.

Hurricanes, cyclones, and storms in the Samana Region:

Why does the Dominican Republic's north coast get hit by hurricanes less often than other places?

The Mona passage, running between Puerto Rico and the DR, is a narrow water expanse connecting the Atlantic Ocean to the Caribbean Sea. These waters are intense and cold, which causes hurricanes to drift north and avoid the Dominican Republic. The island is generally safe thanks to its cold solid currents and pressure system. In addition, the shape of the northern coastline, made up of bays, helps minimize storm surges.

Storm surges will do much more damage on the coast where the ocean floor is gradually tilting. But the beach towns of Cabarete, Puerto Plata, and Las Terrenas are fortunate to have reefs with steep drops in a deep ocean. During Hurricane Irma, the reef protected the beach towns from the enormous waves projected by the storm. 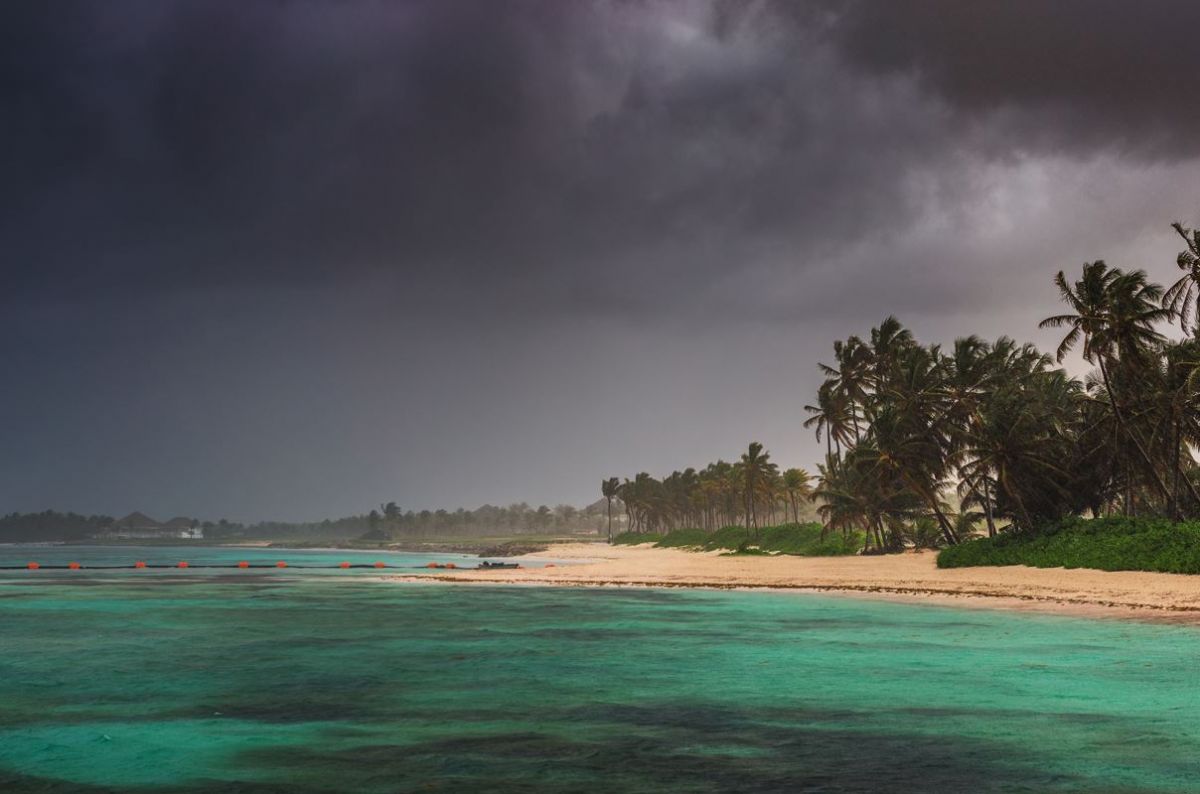 What to do, what to know, and how to prepare for a hurricane?

The US National Hurricane Center (NOAA) has some silent weather buoys in the ocean near the Caribbean. It is constantly on the lookout for any system likely to develop and issues warnings with much anticipation. Once it is inevitable that a storm is expected to occur with a chance of becoming dangerous for locals or tourists, tour operators and airlines then inform their customers.

Be careful; it's essential not only to follow Facebook posts or other social media that spread a lot of panic and misinformation.

It's easy to increase your chances of not experiencing any inconvenience in the Dominican Republic by knowing what to do before the onset of the hurricane season when a hurricane is approaching, and in the event of a storm in the area, as well as what to do after a hurricane.

Indeed, before the start of the hurricane season, it's essential to know your area, determine if you live in an evacuation zone, set up an emergency kit, and review your insurance policies to ensure your home and personal belongings are well covered.

During a hurricane, it's essential to keep your home safe, and stay tuned in by visiting the websites of your local National Weather Service office to find out what kind of emergency could happen and how to react.

Finally, after a hurricane has passed, it's important to continue listening to the radio with local news for the latest updates. If you have evacuated, do not return home until the authorities tell you it's safe, and when you get back, do not drive unless necessary. If you must go out, watch for fallen objects on the road. It's essential to stay out of any building if you smell gas.

I have lived in the DR for approximately 20 years and have had no problems with hurricanes or cyclones. When I arrived here, I learned about this risk and wouldn't have bought or built anything if the stakes were high. However, we're fortunate in this region compared to other places. In an interview I found on the Internet, Bob Sheets, former director of the National Hurricane Center, mentions that a hundred years of hurricane data shows that the chances of Miami being hit by a hurricane are greater than the Dominican Republic. I own several properties in the DR, particularly in Las Terrenas, my favorite beach town in the Caribbean, and so far, I am happy to have chosen this place to live and invest.

Hurricane Irma passed without any natural effect on Las Terrenas. The day before the hurricane, I slept most of the night, expecting all sorts of damage the next day, but there were only leaves flying around and rain. I saw only a few fallen branches when I walked through our home. I checked the trees and roof tiles in my garden, and, fortunately, I couldn't find signs of fallen trees on the driveway. I was relieved.

Of course, the electricity was off, which is understandable for a country that places most of its cables above ground. So, we turned on the generator to power the necessary appliances in the house. I realized that the seaside locations had been more damaged. The workers were already clearing and cutting trees on the roads, and apart from some debris areas, the streets were easily passable. The electricity came back 12 hours after Irma went her way.

Hurricane Fiona caused several damage to businesses, infrastructure, power lines, downed trees, and isolated localities in the province of Samaná. The next  morning, the overflow of a river caused flooding on the Samaná boardwalk and several boats were dragged toward the shore by the strong waves. According to videos shared on social networks, due to strong winds, signs fell to the ground and several trees were knocked down.

Meteorologist John Morales reported that Fiona's winds reached 158 kilometers per hour this afternoon at the Las Terrenas airport in Samaná.

Is it safe to buy a property in the Dominican Republic?

When hurricanes hit the Dominican Republic, they can cause quite a bit of damage because so many structures in the rural and poorer urban areas are not very solid. In addition, a poorly constructed sheet house would also fall victim to European storms.

History tells us that hurricanes do not strike the Dominican Republic often, but occasionally they do, and when this happens, just be prepared.

Our houses in Las Terrenas are built to resist strong winds and rain. So if you're looking to buy a hurricane-proof house in Las Terrenas, get in touch and talk to our real estate experts!

Consider to live or invest in the DR and Las Terrenas? This 65-page guide is for you!

Order Online
Quick Searches
Check all Sales Check all Rentals Check all Activities
Las Terrenas Guides
For Buyers For Sellers For Tourists By Areas By Communities Call Us
Curious about Las Terrenas?. Discover our portfolio of curated listings for sale.
Start Searching
Read Next 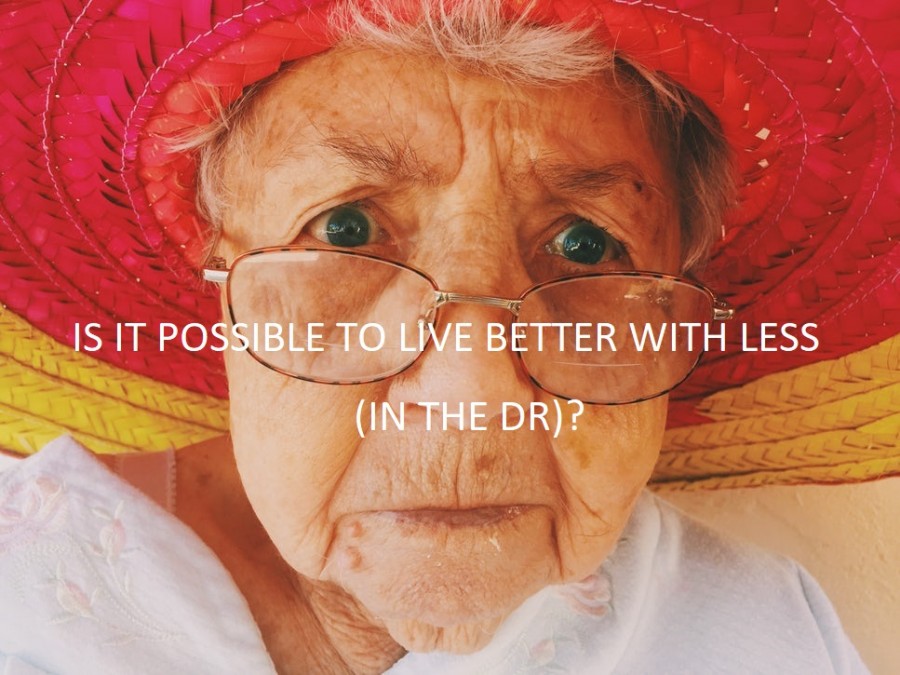 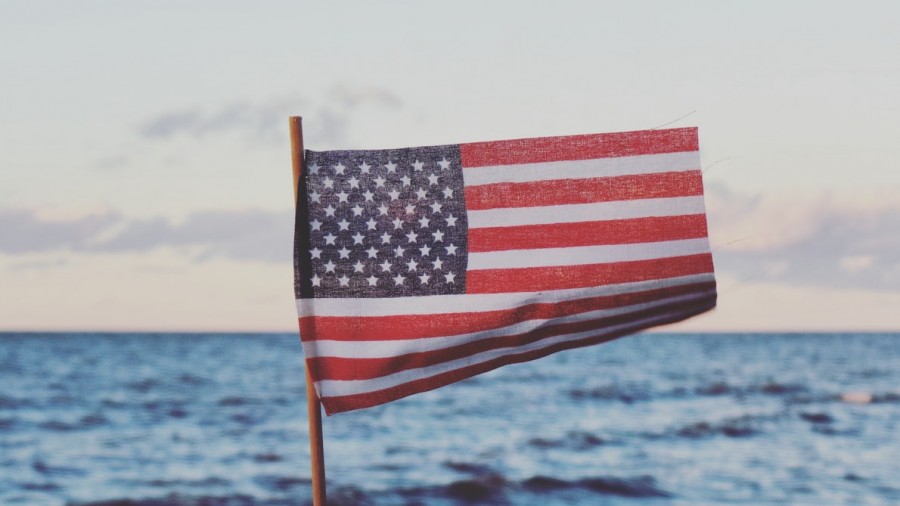 The list of good reasons why Americans retire in the DR
MORE THAN JUST A WISH... There are many Americans who wish to go overseas and live in some exotic place a...
Keep reading 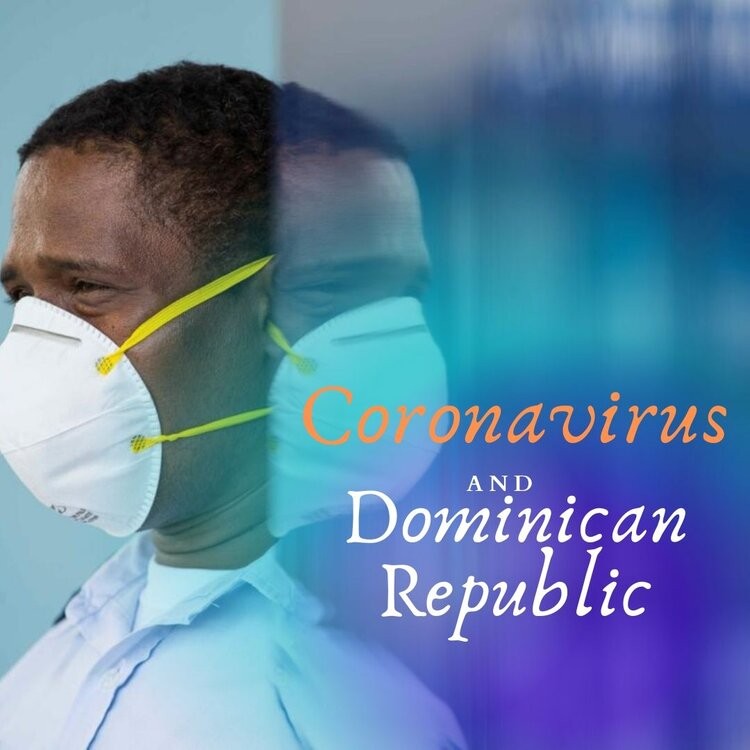 Coronavirus and the Dominican Republic
Since the World Health Organization has declared the virus COVID-19 as a pandemic on March 11th, 2020. Citie...
Keep reading

Save your favorite listings, searches, set up notifications and much more

Don't forget to sign up for the latest property alerts